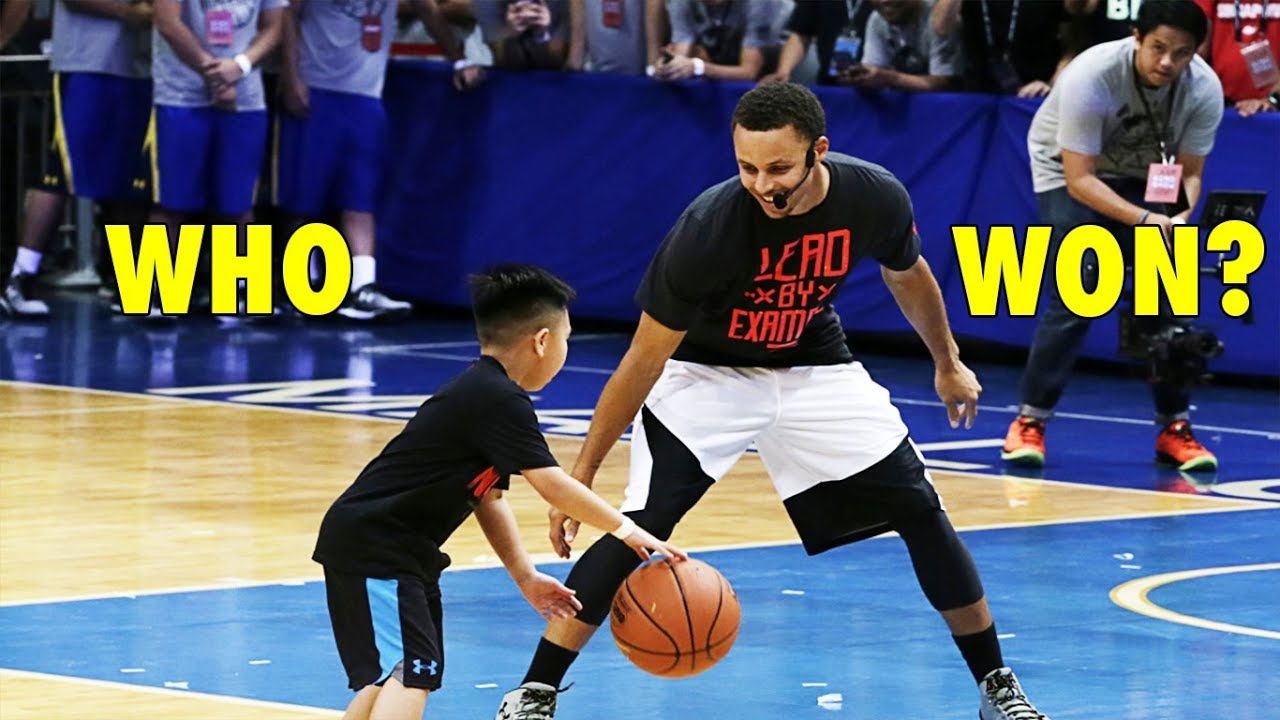 Stephen Curry takes on a 7-year old boy who shows some of his basketball dribbling skills to the MVP earlier during 2015 Under Armour Camp Tour in Manila, Philippines. Stephen Curry was impressed with the kid’s talents and degree of crossover moves, and complimented him “He’s on his way. Seven years old, I can’t do that at seven.” This 7-year old kid’s real name is Dominic Tuason, and he might be the another version of “Terrence Romeo” in a decade.

Under Armour(UA) is shuttling Stephen Curry around Asia, as part of a promotional push for his latest signature kicks, the Curry 2. Just a month ago, LeBron James also visited Manila as a part of the Nike RISE tour program back in August 2015. Curry also played a full court match with the national basketball team of Manila, Smart Gilas Pilipinas at the Mall of Asia Arena.

Make sure you have your medical insurance, health insurance and life insurance before playing a 1 on 1 game with Stephen Curry himself!

● Stephen Curry left his initial basketball endorsement Nike, and signed with Under Armour(UA) in 2013 instead. Under Armour(UA) had signed Curry to a contract extension through the year 2024, which is worth close to $4 million per year.

Stephen Curry has been one of the hottest names on the endorsement trail as well, locking up partnerships with Under Armour(UA), 2K Sports, Express, State Farm Insurance, Unilever’s Degree, JP Morgan Chase, Muscle Milk, JBL Headphones, Nissan’s luxury cars brand INFINITI, Vivo smartphones, Sony Pictures, Brita Water, and ZAMST. He was also featured in an Apple commercial to promote the iPhone 6s. Curry also got a major boost after soccer star Lionel Messi posted a picture to Instagram holding up an autographed Curry jersey to his 30 million followers.

By partnering with the sharpshooting Mr. Curry, Under Armour(UA) is hitching itself to one of the fastest-rising NBA stars. Fast-rising Under Armour(UA), which was founded back in 1996, has a goal of eventually toppling Nike to become the world’s top retail sports brand.

In 2014, he also launched Three-For-Three Challenge, in which he will donate 3 bed mosquito nets to people in Africa to prevent malaria, for every 3-pointer he makes during the season. Curry made 286 3-pointers in the 2014-2015 NBA season, so he donated 858 nets. In 2017, The limited-edition “Nothing But Nets” sneaker is part of Curry’s fight against malaria. For every pair of the new $120 Under Armour(UA) Curry 4 sneakers sold, the Warriors guard will donate an insecticide-treated bed net aimed at protecting kids, refugees and families from malaria.

Later in 2017, Curry made an appearance at a convocation Wednesday at Liberty University, where his brother Seth Curry attended college, to help support the “Kick’n It” foundation’s drive to donate 20,000 pairs of shoes to children in the Republic of Congo, in helping to put shoes on the feet of disadvantaged children around the world.

Back on December 18, 2017, there was a claim from both Sean “Diddy” Combs and Stephen Curry in saying they were interested to buy the NFL American football team Carolina Panthers, which is also home to Stephen Curry’s family in Charlotte, North Carolina.

Back in 2016, the National Basketball Players Association (NBPA) of which Stephen Curry and Kevin Durant are executives contributed over $15 million a year to fund health insurance and medical insurance plans for most retired NBA players.The plan gives all retired players who played at least three years health insurance until they are eligible for Medicare. Players with at least 7 years in the league get lowered costs, while players who played 10 seasons have their families covered by the life insurance plans.

Back on April 23, 2018, Stephen Curry and his new production company called Unanimous Media, signed with Sony Pictures to produce film and television projects related to family, faith, and sports themes while also extending to partnerships, electronics, gaming and virtual reality(VR). Curry is blessed to have this platform, and he wants to use it to affect the world positively.